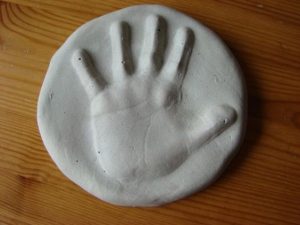 Purpose: the purpose of this message is to recognize the stages of grief prompted by the Coronovirus crisis and to stand on God’s grace as we meet the challenge.

One of the stories I sometimes tell at funerals is about a small boy who creates a plaster-of-Paris handprint molding for his Dad for Christmas. He wraps it in happy snowman paper and deposits it behind the Christmas tree, so that it will be the last gift opened. On Christmas day, when gifts unwrapped, he crawls under the tree to fetch the present. Proudly, he marches the gift to Dad. On the way, he trips over discarded wrappings, shattering the treasure to pieces. Briefly, he is stunned in disbelief; then, the tears begin to flow…

But Mom, wiser in the ways of grief, picks him up and holds him in her lap, “Of course it matters! He worked so hard on this!” She hugs him while he sobs. (pause) As tears ebb, she wipes them from her son’s face, pushes back his hair, and looks him in the eye, “Now,” she says with conviction, “let’s pick up the pieces and see what we can make of them.”

I thought of this story as I absorbed an essay from a CNN staff writer who described his feelings of grief over the way life has changed during the past two weeks. He wrote of his worry over his children, mixing with other kids in the neighborhood or park. While waiting for his order at Dairy Queen, he wondered how long it might be before his family could return to DQ for a subsequent Reeses Peanut Butter Cup blizzard. He spoke of his concern over touching the debit card machine and receipt.

He sympathized with high school and college students, banished from campus, instead of preparing for prom or graduation. He expressed gratitude for a job he could work remotely from home, but worried over those who could not, and for those whose businesses might close and never re-open. He fretted over those risking themselves to keep bath tissue on the shelves, or to provide continuity of healthcare.

My eyes blurred with tears as I read, and awareness began to surface, “We are all in grief.” The mold has broken, and we want desperately to be held by a Comforter, even as social distancing forbids it.

Elizabeth Kubler-Ross, a pioneer in understanding the tangle of emotions we call grief, identified five stages to the grieving journey: denial, anger, bargaining, depression and acceptance. Non-linear, the stages often ricochet among themselves before settling into acceptance.

We can identify them in our opening story. Eyes wide, the boy stares at his dropped, shattered gift in denial, “Maybe it’s not really broken!” But he knows it is. Weeping and anger spill over, “Why was I so clumsy? Who left the wrappings in the way? Why doesn’t Dad understand? Why did I ever try to do this?” He may wish to bargain, “Can’t I have a do-over? Please don’t let it be as bad as I imagine!” Tears give way to depression as he realizes, “The gift is broken, no one can walk it back, celebration has been lost, Dad will receive no gift.” Finally, as depression and acceptance blend, Mom offers a way forward, “Now. Let’s see what we can make of what’s left.”

It’s ok to grieve–to feel sad over what has changed, to fear what the future portends, to be angry about what we do not understand and can’t do much to fix. It’s ok to bargain with God for a better result. Even blaming is a natural part of grief, often misdirected at those ‘in charge,’ the ones who should have done more to prepare for what none of us prepared for. It’s even ok to feel depressed for a space, as the last vestiges of denial give way to a new, unwanted reality. In time, we can pick up the pieces to see what can be made of them. For now, we weep together, as long as we remain at least six feet apart.

Jesus’ healing of a man born blind may likewise heal us from emotional paralysis. We imagine his parents celebrating the birth of their son, only to have it cut short by the realization that he sees nothing of the world around him. “Maybe he’s not really blind,” they console one another. But he is blind, and they can tell. Maybe they blame God for it. Maybe they blame themselves. Certainly those present when Jesus encounters the man as an adult want someone to blame, “Rabbi, who sinned so that he was born blind, this man or his parents?”

Blaming may be a human part of the journey, but it is rarely productive. Jesus confronts the question head on: “Neither he nor his parents. This happened so that God’s mighty works might be displayed in him.” By this time, the man and his parents had likely worked through their anger, bargaining and depression. It was what it was, and they accepted his blindness as their ‘normal’ reality.

Jesus, however, did not. He imagined a different reality. He recognized an opportunity for miracle. Making a muddy paste from his saliva mixed with dirt, he applied the salve to the man’s eyes, instructing him to wash in the pool of Siloam, which was believed to be a source of divine healing. The man did as instructed, and for the first time in his life, he was able to see.

There are times when denial wears the mask of faith. “It won’t really matter if I go to the hair salon,” one might say, “God will protect me from COVID-19.” If I am honest, I suppose there was an element of that in my decision last week not to cancel worship services. I rationalized the virus was not yet here in Auburn. In hindsight, I put us at risk, for which I deeply apologize. God promises to be with us in all circumstances, but does not promise to protect us from all circumstances. Jesus, after all, did die upon a cross before rising from the dead on Easter morning.

There is, however, nothing wrong with imagining a better world, a grace-filled world, a hope-filled world. God can do miracles, and God does do miracles, and there is nothing wrong with asking for one. Who knows how God may intervene? But here’s the thing: we, too, can be part of God’s miracle. We can pick up the pieces to see what can be made of them. We can rediscover the truth that the church is not a building, but a people.

When we offer prayers of serenity (God grant me the serenity to accept the things I cannot change, the courage to change the things I can, and the wisdom to know the difference), we learn to let God do God things, while we focus on doing people things. Things like calling someone on the phone to ask how they are doing, sharing what we have with those who have not, making a donation for a relief effort, giving blood to replenish supply, singing a song for a virtual congregation, distributing boxes of food to those who have none, stocking the shelves with bread, sending a home-bound child an educational assignment, offering an on-line Zumba class for those who can’t go to a gym, showing a technologically-challenged pastor how to live-stream. While actively praying for miracle, we can become a cumulative miracle.

Maybe God is holding us as we grieve, giving us a moment to feel the sorrowful things we feel, but then God offers a way forward, “Now. Let’s see what we can make of what’s left…”