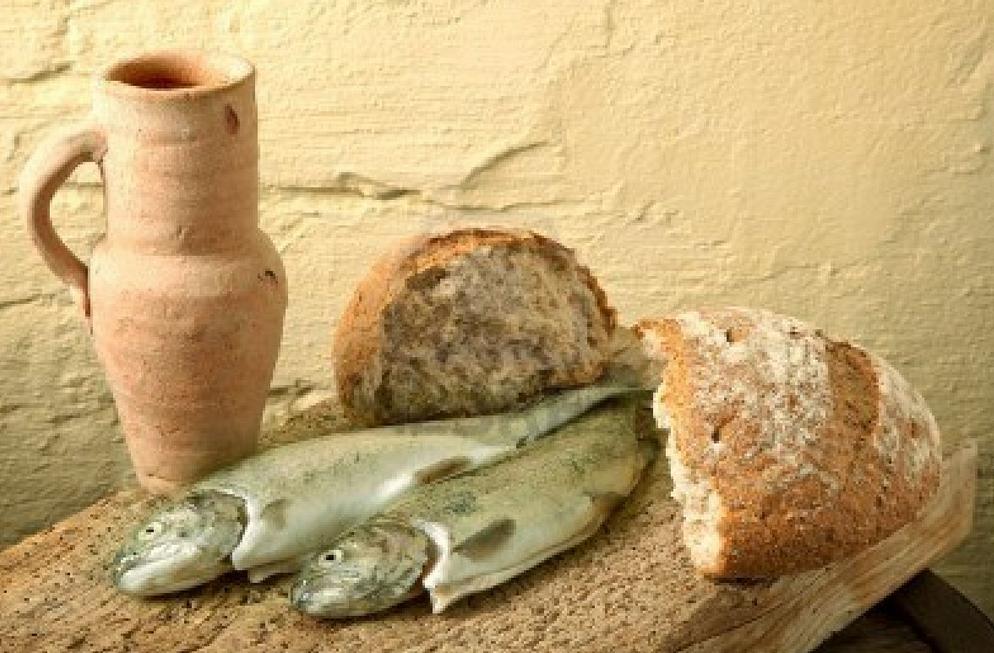 Purpose: the purpose of this message is to encourage us to release what we have to God so that miracle may emerge.

Over the years, I have watched many video dramatizations of Jesus’ miracle, ‘Feeding of the 5,000.’ I often find myself chuckling over the sharing of the fish. The bread is shared without complication: take a loaf, break it in two, pass the half-loaves along as pieces are broken and eaten. But the fish? That is always interesting to watch. They are generally distributed like trout-sized sardines. Those who receive them smile with wonder-filled eyes, but no one eats them, because, “Really? How do you eat a scaly fish which has not been properly prepared? Where is the Miracle Whip when you need it?”

“You’re missing the point of the story,” my wife reminds me, and as usual, she is right. The focus isn’t on the bread and fish, but on the mysterious generosity of the holy as all receive their fill, physically and spiritually. But that is my point exactly. We often read the biblical stories, convinced we know all they are trying to teach, without really paying attention to detail and context. We come away with a half-message instead of the wisdom of God’s Spirit.

So let’s look at the story with a bit more depth. What is really happening here? Jesus has just been told that his cousin, John the Baptist, whose unusual mission anticipated Jesus’ own, has just been killed, beheaded by King Herod. Jesus, unsurprisingly, needs some time away. He seeks solitude for grieving and perspective, but the crowds follow him to the deserted regions. Overcome with compassion, Jesus cannot ignore their need, so he heals, and teaches, and teaches and heals until the day is quite advanced.

“Send them away to buy food for themselves!” the disciples interrupt.

“There is no need to send them away,” Jesus answers. “You give them something to eat.”

To which they protest, “We have nothing here except…five loaves of bread and two fish.”

But I can’t forget the context which frames this snapshot from Jesus’ ministry. Though overwhelmed with grief over John’s death, he nevertheless offers himself to God for the healing of the people. He is a wounded healer, and his willingness to serve changes lives even at this personal point of vulnerability.

His perseverance has not gone unnoticed. The disciples have been watching him all day. They understand that he has put his own grief on hold to serve those who have come for help. Their concern for the welfare of the crowd veils an even greater concern for the welfare of their Master. If the crowd leaves, then maybe Jesus will have some much-earned rest to care for his own wounded spirit.

Jesus, however, does not acquiesce to their agenda. Instead, he invites them into the healing work in which he has been engaged. “There’s no need to send them away. You give them something to eat.” Perhaps it is his way of saying, “God has unleashed the miracle of the kingdom here today. You have accurately recognized a real need of those we serve. There is no greater time than now to show them God’s love. Show them God’s love by feeding them!”

Where Jesus sees abundance, however, his disciples see scarcity. “We have nothing here except (pause) five rolls and two fish sticks.” They might just as well have said, “We’re too tired to help. We need to rest. We’ve been at it all day, too, you know!” But that is not what Jesus did; and faithful as they are, they give the food to Jesus, and then watch, amazed, as he multiplies the bread and fish to the capacity of thousands.

There is a fable, shared once before, about a beggar in India who learned that a wealthy Maharaja, known for his generosity to beggars, would be passing by in parade. He positioned himself near the front of the line, hoping to receive assistance. Much to his delight, the Maharaja deliberately reached out to him from the processional. “What do you have to offer me?” the Maharaja asked.

Startled and dismayed, the beggar pulled out his small stash of rice, counted out five grains, and offered them to the Maharaja. He could not believe the wealthy man would take from him when he had so little. The parade resumed. As the beggar reached in his pocket to replace the rice, he felt something. To his astonishment, he pulled out five golden nuggets the size of the rice grains offered. Putting his hand to his head, he admonished himself, “If only I had given it all!”

The little we have may seem small and insignificant to us, but when it is released to the care of God, it can become a mighty miracle. The mustard seed is small and inconsequential, but when it is grown, it may be large enough to serve as a home for several birds. A simple lunch of bread and fish, when freely given, may have the capacity to feed over 5,000 dinner guests. The tiniest faith, planted in God’s garden of love, has the potential for transforming the world into a heaven on earth.

We have nothing except…(you fill in the blank, for that is the miracle to which God invites you). Mother Teresa once said, “We can do no great things—only small things with great love.” Yet that gift in itself is often the source of greatness.

Bruce Porter was a stress counselor and chaplain of his local fire department high in the mountains of Colorado at the time of 9/11. Believing he could be of service, he took the earliest flight and arrived at the horrible Ground Zero scene six days later. The destruction was far worse than any televised images. He stood in shock at the base of nearly five stories of twisted steel girders, pipes, wires, metal ductwork and unidentifiable debris. The fumes were overpowering and time was fast running out for locating survivors.

Clad in firefighter gear with a chaplain-labeled helmet, he prayed that God would somehow help him offer comfort during this dark time of national grief. Soon, a tent morgue was set up in front of the World Financial Center on Vesey Street. For several days
Chaplain Porter worked in the examination room as remains were brought in for identification. He was deeply moved by the tender care and profound respect everyone demonstrated for the dead which were found. Many worked far beyond what customary stamina would permit. All were grief-stricken and demoralized. Even the search and rescue dogs, trained to find living victims, were depressed by lack of success.

In a scene he witnessed many times, when the deceased was identified as a firefighter or police officer, an American flag would be unfolded and draped over the stretcher. Several would reach with their latex-gloved hands to tuck in the edges like a parent tucking in their beloved child after a long, tiring day. The doctors would then step back and say, “Chaplain?” Chaplain Porter would then step in to offer prayer.

As evening closed in one rainy night on the hellish scene of the collapse, Chaplain Porter heard the faint ringing of his cell phone. Asnwering, he heard the slight voice of his five-year-old daughter, Hannah, “What are you doooo-ing Daddy?” Born in Nanching, China and abandoned by her parents at four-days-old, her only crime was that of being born a girl. Left beside a dusty road, wrapped in a soiled rag, she was found by a passer-by and brought to a government-operated nursery where she spent the first thirteen months of her life.

Hannah’s sweet voice pulled Chaplain Porter to a reality temporarily suspended. She was calling from her ‘normal’ world filled with stories of Winnie the Pooh and the delight of watching multi-colored birds visiting her special feeder. He ached to be back there again. How could he answer her question honestly without spoiling her precious innocence?

As his eyes swept over the smoldering wreckage where thousands lay trapped, he said, “Honey, some really mean bad guys made a big mess here in New York City, and I’m just helping to clean it up.”

There was a pause. In her sweet innocent voice, Hannah replied, “Daddy, can I come with my little broom and help you?”

Chaplain Porter fell to the mud as her words sank in. The effort to choke back tears made it impossible to speak. Finally, he found his voice enough to mumble something about how much she was needed at home. After saying good-bye, he realized Hannah had expressed exactly what he was feeling. He had come with his ‘little broom’ of prayers to help clean up millions of tons of twisted wreckage, shattered dreams and broken hearts. It seemed inadequate to the task, and yet, every little broom makes a difference.

And here we are in the midst of a global pandemic with 18 million cases, 700,000 deaths, an economy in crisis and social disharmony. We pray to God for help and intervention. “Send the crowds away,” we say, “so that we can focus on our own problems.”

“There’s no need to send them away.” God says. “You give them something to eat.”

“We have nothing here,” we protest, “except… a little broom…a little prayer…a little bread and fish…a little faith… Hey, wait a minute, maybe we have everything needed for a world-sized miracle!”