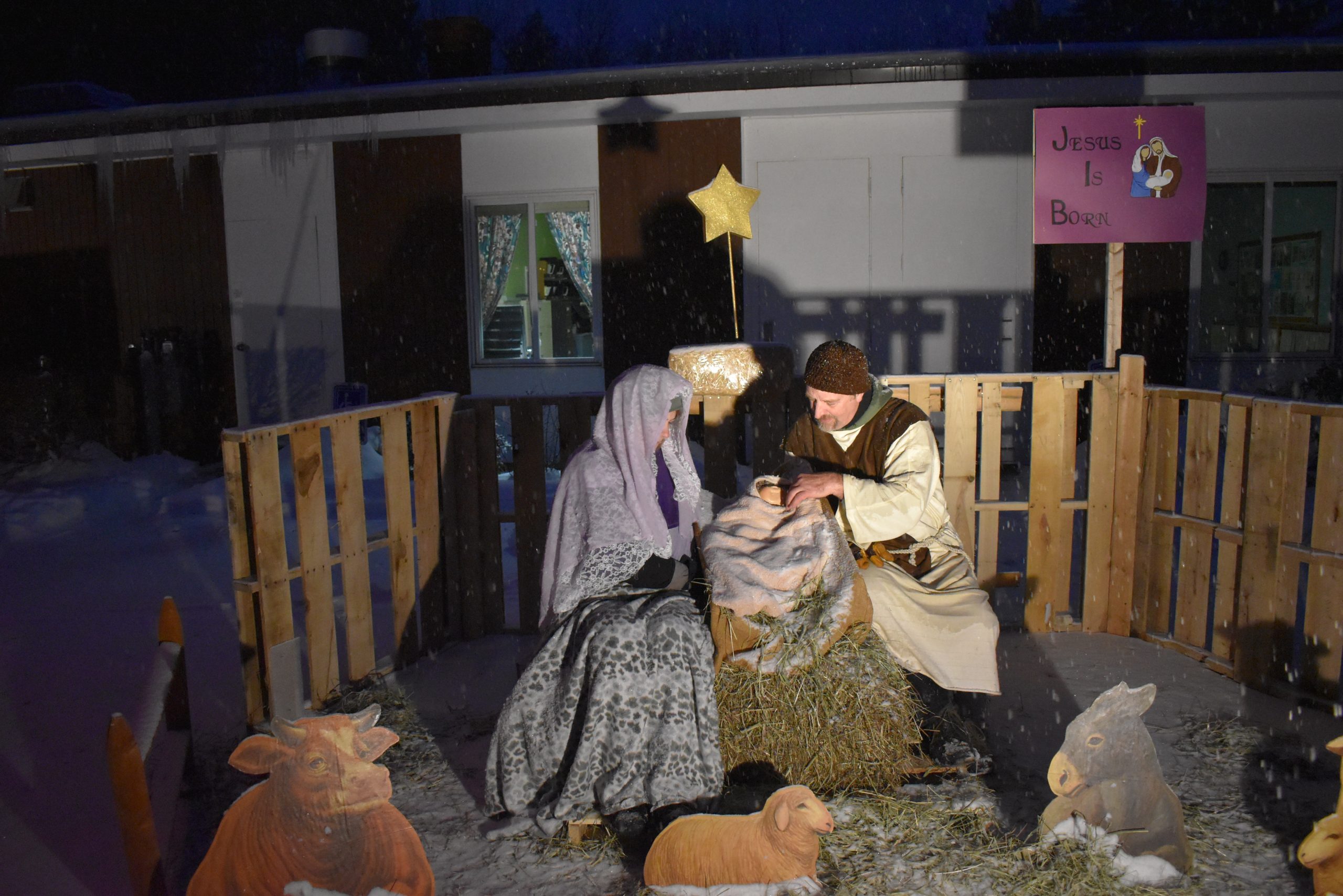 Purpose: the purpose of this message is to seek God and believe in the one sent in God’s name.

While waiting for my wife to return from her doctor‘s appointment one day, I glanced at a ledge beyond the parking lot. Oddly, something appeared to be sprouting from it. I leashed and liberated our pups from the car, and went over to investigate. Sure enough, there was a tender plant emerging from the rock. I couldn’t discern any crack or fissure in the ledge, yielding a ‘right of way,’ through which the shoot might grow. Instead, it looked as if the plant had forged its own path through the ledge, revealing a persistence of growth even the ledge could not prevent. “Life will have its way,” as they say.

When we speak of advent themes, we often focus on hope, love, joy and peace, or perhaps waiting, preparation, anticipation, and ‘keeping watch.’ Sometimes we even give names to the candles: Prophecy, Bethlehem, Shepherd, Angel and Christ. But in today’s liturgical readings, another theme emerges: persistent belief, trust in God which will not quit, confidence that the promises of God will surface at just at the right time. In the words of Paul in Romans 8, “Neither death, nor life, nor angels, nor rulers, nor things present, nor things to come, nor height, nor depth, nor anything else in all creation, will be able to separate us from the love of God which is in Christ Jesus our Lord.”

Growth will have its way, for Jesus came that we might have life, and have it with great abundance. If a rock is raised to stone a woman caught in sin, it will be tossed aside by Jesus’ admonition, “The one who is without sin may cast the first stone.” If the people are silent, the rocks themselves will sing Jesus’ praise. If a rock blocks access to the garden tomb, it will tremble and give way to Easter resurrection. No rock can stand against the persistence of God’s intent. Each and every year, Advent invites, instructs and insists: God will make a way where there seems to be no way.

We see it in Isaiah’s prophecy of the peaceable kingdom: a shoot from the stump of Jesse will sprout, a ruler of justice will emerge from David’s progeny to bring peace to the world. Military weapons will be repurposed for agricultural endeavor, and no one will train for war anymore, wolf will live with the lamb, and a little child shall lead them, for the kingdom of God will come to earth even as it is in heaven.

We see it in the psalmist’s celebration of a servant sovereign: “Let the king bring justice to the people who are poor, let him save the children of those who are needy…” We see it in Paul’s expansive embrace of the Gentile nations: “There will be a root of Jesse (David’s father) who will also rise to rule the Gentiles. The Gentiles will place their trust in him.” And we see it in the proclamation of John the Baptist, too: “Change your hearts and lives! Here comes the kingdom of heaven!”

I find it fascinating that John speaks of an ax poised at the root of a tree, ready to chop down every one which does not bear good fruit, because the advent promises of God emerge from the discarded stumps of life’s mistakes. John warns that the one coming after him will baptize with Holy Spirit and fire, but Jesus emerges with hope not condemnation. He spells it out for Nicodemus and for us, too, “God so loved the world that he gave his only begotten Son, so that everyone who believes in him may not perish but may have eternal life. Indeed, God did not send the Son into the world to condemn the world, but in order that the world might be saved through him.”

This call to belief reminds me of a second child of our culture’s celebration of Christmas. We call her Virginia, as in, “Yes, Virginia, there is a Santa Claus.” The story is disarmingly simple, yet profound in its affirmation of the spirit of giving.  In 1897, a year before my grandfather’s birth, an eight-year-old girl by the name of Virginia O’Hanlon wrote to the New York newspaper The Sun asking whether Santa Claus was real: “Some of my little friends say there is no Santa Claus. Papa says, ‘If you read it in The Sun, it’s so.’ Please tell me the truth, is there a Santa Claus?”

The anonymous editorial, later attributed to Francis Pharcellus Church, after his death in 1906, became one of the most famous editorials ever published. I invite you to hear it anew this year:

Virginia, your little friends are wrong. They have been affected by the skepticism of a skeptical age. They do not believe except they see. They think that nothing can be which is not comprehensible by their little minds. All minds, Virginia, whether they be men’s or children’s, are little. In this great universe of ours man is a mere insect, an ant, in his intellect, as compared with the boundless world about him, as measured by the intelligence capable of grasping the whole of truth and knowledge.

Yes, Virginia, there is a Santa Claus. He exists as certainly as love and generosity and devotion exist, and you know that they abound and give to your life its highest beauty and joy. Alas! How dreary would be the world if there was no Santa Claus. It would be as dreary as if there were no Virginias. There would be no childlike faith then, no poetry, no romance to make tolerable this existence…

…Nobody can conceive or imagine all the wonders there are unseen and unseeable in the world. You may tear apart the baby’s rattle and see what makes the noise inside, but there is a veil covering the unseen world which not the strongest man, nor even the united strength of all the strongest men that ever lived, could tear apart. Only faith, fancy, poetry, love, romance, can push aside that curtain and view and picture the supernal beauty and glory beyond. Is it all real? Ah, Virgina, in all this world there is nothing (more) real and abiding.

Virginia’s question is one of belief. What is the truth? What is real? The editor earnestly urges Virginia to hold on to her belief, because her belief is an affirmation of miracle, a confidence that giving can be life-nourishing to all who practice it, an assurance that hope, love, joy and peace are not sands in an hourglass, but things one can hold on to, yet freely share with others.

It is the same kind of belief Jesus requires of Martha when her brother Lazarus died.  “I am the resurrection and the life;” he said, “those who believe in me, even though they die, will live, and everyone who lives and believes in me will never die. Do you believe this?”

“Yes, Lord, I believe that you are the Messiah, the Son of God, the one coming into the world.”